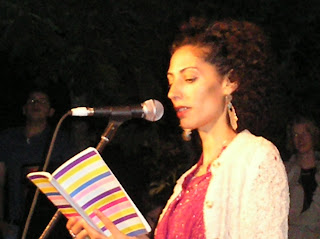 Suheir Hammad is one of the Palfest participants who deserves a post to herself. A Palestinian-American, Suheir was born to refugee parents in Amman. She spent her first years in civil war Beirut before moving to Brooklyn, where drugs and gang wars raged. She is a poet, prosewriter and actress. Her poetry erases any distance between the personal and political, and is humane, passionate and particular. Greatly influenced in its rhythm, diction and pacing by New York hip hop, it fits snugly into the tradition of Palestinian oral delivery exemplified by the late poet Mahmoud Darwish.

Suheir stars in the film Salt of this Sea, but it is surely time someone directed her in a poetry performance DVD. You have to hear her read to really appreciate what she does. A good place to start is the poem First Writing Since, which concerns 9/11. Here is We Spend the Fourth of July in Bed. And one for Rachel Corrie. Here is part one and part two of an al-Jazeera International interview, and here she is reading for Palfest in Ramallah. I hope the Palfest film-makers have more to come. The most powerful part of her reading in Ramallah – powerful enough to bring the audience to tears – was her series of poems for Gaza.

Jeremy Harding describes Suheir as "a younger, image-conscious, thoughtful militant for Palestine, one of a new generation who do the writing, while the Israelis oblige by extending the wall."
Posted by qunfuz at 8:13 AM

As soon as I'm back in London me and Alice are setting to work on getting the Gaza series cut and up there.

So there's plenty to look forward to. 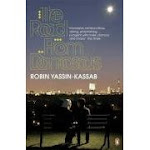